Minimally invasive dentistry is a principle that is ever more important in aesthetic dentistry of today. With patients becoming more aware, and technology advancing, the need to use novel yet well-researched techniques to improve aesthetics should always be sought. Resin infiltration is a technique that minimises invasion, whilst maximisation of aesthetics. ICON resin infiltrant has more than ten years of research and cases from all around the world that demonstrate optimal aesthetic outcomes with minimal enamel surface preparation.
The workshop will allow for delegates to understand the technology behind ICON resin infiltration, and how the alteration of the refractive index of white spots can be used to mask white spot lesions in a range of clinical situations and scenarios. Furthermore, the process of diagnosis of the depth and thickness of the white spot will be discussed, along with adjunctive measure that may be used to optimise outcomes. 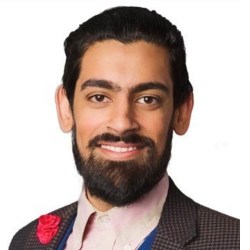 Dr. Shiraz Khan graduated from the University of Birmingham Dental School in 2013. Having successfully completed foundation training and winning several prizes, he finished his dental core training in a range of specialisms including Restorative Dentistry at Croydon University Hospital, Guys and St Thomas’s. He is currently placed in private practice in the heart of London, Clapham and suburban Hemel Hempstead. Shiraz has heightened his profile at this albeit early stage, being invited to lecture to young dentists around the country, as well as having lectured internationally. Most recently he has returned from Tehran, Iran lecturing at the EXCIDA 57th international congress regarding aesthetic dentistry. Progressing in his career in additional post-graduate qualifications and building a portfolio of achievements means that Shiraz is nothing short of an aspirational individual. He invests time into his career development and experience as he has in the process of completing his Masters in Restorative Dentistry. In addition he has travelled to Portofino, Italy to learn off the World’s leading clinicians in Style Italiano. He regularly sharing with like-minded professionals. Recently his hard work and efforts were recognised by the Young Dentist Academy who appointed Shiraz to become The Director. Shiraz has won several awards in the UK including The Fast Track 4 Award in recognition of his commitment to dentistry and becoming a leader of the future. Most recently Shiraz has been voted the Best Young Dentist South 2017 in the prestigious UK Dentistry Awards. This has confirmed, his drive, aspiration and dedication to dentistry in which he always pursues to develop in.